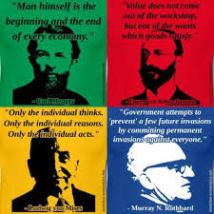 We will proceed to analyze the main contribution in the field of methodology by one of the most important figures of the Austrian School of Economics: Ludwig Von Mises.

Statements in economics are, as the logic in mathematics, “a priori”. They can not be verified or falsified, because they are prior to any experience. Mises adopts the term of praxeological science: praxis-logical, this is to say, the logic of action. For many economists, this premise may result dogmatic and unscientific. Nevertheless, we find some interesting referents, such as the eminent Jean Baptiste Say, who much before Mises argued that political economy consists in a set of general principles which do not precise test, because they emerge from undeniable facts and their deduction.

Therefore, the process of validation of hypotheses is different in social sciences that in natural sciences. In these latter, the validation is clear. Natural scientists can isolate any element and test it, experiment with it and contrast the results. In economics, certain propositions such as the marginal utility, the exchange or the intertemporal consumption, do not need being tested, because we deduce them logically and they can not be denied unless we fall into a logical inconsistency.

Accordingly, Mises, influenced by Kant, asserts that in social sciences there are true synthetic a priori propositions. This is to say: propositions whose truth can be definitively established without need of observations (a priori), but to do so the means of formal logic, if well necessary, are not enough (synthetic). That is why we need the axioms, which may result more difficult to find out than any empiric test.

Axioms are self-evidents because one can not deny them without falling into a logical contradiction. They are found through the reflection over ourselves, understanding us like actors who know.

The empirical observation shows us the facts as they occur, but it does not tell us why they occur in the way they do. Mises is based from axioms of action aprioristically deduced, considering economic actor as a “homo agens”. We can not deny the axiom of human action, because precisely the act of denying it is an action in itself.

In conclusion, these categories of Human Action can not be verified or falsified. The axioms of action are not observable. Thus, propositions in economics are not and will never be the same as those in natural sciences.

Within this theoretical scheme, other important contributions from economists like Jesus Huerta de Soto, have demonstrated the grave inconsistencies of modern positivism represented by Milton Friedman (as afore explained, mainly influenced by Popper´s Logic of Scientific Discovery). According to Huerta de Soto, if the character of “scientific” of a statement is given by its capacity of being falsified, as stated by the criterion of falsification, then there are two obvious inconsistencies:

-Second, before any falsification or contrasting with reality, the positivist scientific will be forced to give a previous meaning to the reality he is observing to. Thus, any meaning of facts always implies a prior theory.

Despite these objections, Huerta de Soto carries on showing that the particularity of social sciences makes impossible the success of positivist model. This is so due to the role of categories in social sciences, which are purely essentialist or teleological. Money is not money because it is a piece of gold or silver. It is money based on the “meaning”, “order”, “end” that economic agents believe it has for they, which is none other than medium of exchange.

To conclude, the peculiar nature of social sciences implies, following the austrian model, that the method of research must be different from the method applied in natural sciences. An essentialist method based on the axioms of human action whereby propositions are logically and aprioristically deduced.